No one really likes to get stuck with an automated response system. Talking to a live person over the phone is so much easier and less time consuming. Customers often get frustrated and annoyed when they have to deal one.

One customer had a specific question regarding his account with a particular company. So he decided to give them a call. The first thing he heard was a prerecorded response instructing him to press one for one thing, press two for another and so on. However, there was one little problem. His unique circumstances, along with the concerns he had, was not really covered in the menu options given to him by the automated system.

Because the menu options weren’t in his favor, he just decided pressed zero. He figured that a representative or at least an operator could assist him better by pressing it. Isn’t this what you’re supposed to press when you just want to talk to a human being? Turns out, he hit the zero a bunch of times only to be bounced right back to the main menu and prompted to start all over again. Talk about getting the run-around!

In addition to being redirected several times, he found himself having to repeat things over and over, which was very unsatisfying. He thought that maybe saying a certain keyword would connect him to someone. Instead, he just got an automated response, “I didn’t catch that,” and was redirected for the fifth time. Eventually he just screamed at the phone, “Get me a person!”

Can you guess what happened next? You got it! “I didn’t catch that. Press one for …”

When speaking with a live person, customers can be sure that someone will be there to actually listen to concerns and address unique circumstances. Let’s face it. A robot or a prerecorded message just won’t be able to relate to someone like a person can. Good thing that Contact One’s call center connects with contractors, small businesses and professional establishments to give customers the opportunity to talk with a real receptionists on a 24 hour basis.

Whether you are new to the world of owning a business or have years of experience, there is always room for improvement. Use the links below to make the most of your customer relations. If you need some business help, Contact One Call Center is here for you. Call 1-800-278-3347 today to learn about our…

Cold calling is parallel to door-to-door soliciting in the world of marketing; it is largely unwelcome and considered an antiquated way of generating new sales leads. Unfortunately, many business owners and sales managers are unaware of the modern solutions for new business relationships, leaving them to rely on the methods of the past. Read on… 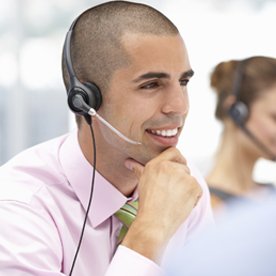 Leaving your patients hanging isn’t a good look, and a medical answering service can make sure you never have to. If you want to reap the benefits, first you should find the right company to work with. Find an answering service that’s available around the clock and will keep you HIPAA-compliant, and take your time…

Contact One is proud to announce we can now send HIPAA compliant test messages to Doc Halo app users. If your medical office is using Doc Halo give us a call to see how we can help with your after hour answering service needs. If you are interested in purchasing the Doc Halo app you…

When looking for a call center it is important to consider the type of service you need. There are  three types of basic call centers and having some knowledge about what service(s) each call center provides will help you choose the right one. They all answer calls, can take messages, orders, offer technical support, set…